Introducing the Ecas4 technology: A new approach for managing health in a care facility

Our health is continuously at risk, owing to the widespread presence of microorganisms potentially able to enter in contact with our body. A microbiological contamination may take place due to different causes: in general, it is consequent to the non-intended or accidental contact with infectious material like bacteria, yeast, mould, fungi, virus, prions, protozoa or their toxins and by-products. The contact may happen from the air, the water, or by touching or being exposed to infected surfaces.

Our body is a rich source of nutrients and water, which most pathogens need to survive; surprisingly, we remain healthy most of the time. We are obviously very good at protecting ourselves! We are equipped with a potent defence system, which relies on the activity of different lines of defence. Firstly, the presence of physical barriers (the skin, some mucous membranes, nasal hairs, cilia, etc.); the second level, which is still part of the “general defence system”, is represented by the activity of some specialized cells, generally known as “white blood cells”, which are expected to engulf the pathogens that have succeeded in overcoming the first barrier.

The subsequent, more potent, defence level is called “specific defence system”: at this stage, the lymphocytes present in our organism attack the pathogens by producing specific proteins called “antibodies”.

When white blood cells engulf pathogens, their subsequent “digestion” is performed through the activity of a series of enzymatic reactions. During the so-called “respiratory burst”, hydrogen peroxide and other forms of “reactive oxygen species” (ROS) are formed, which help not only in the fight against the pathogen but also by acting as signals for bringing more leukocytes toward the wound.

A special form of ROS is represented by hypochlorous acid (HOCl), a neutral molecule that is produced by neutrophils through an enzymatic (catalysed) reaction between chlorides and the endogenously formed hydrogen peroxide. The HOCl molecule is a biocide more potent than the original reactant (H2O2) but less stable; for this reason, it is conveniently synthesized just when required.

Mimicking nature, the Ecas4 technology relies on an internationally patented electrochemical cell for the synthesis of a dilute solution of hypochlorous acid; we call it “Anolyte”, because its synthesis is carried out at the anodes (positively charged electrodes) of the electrochemical reactor.

Scientific literature is rich with studies reporting on the effectiveness of hypochlorous acid against an increasingly wider number of pathogens (see e.g. [European Journal of Clinical Microbiology & Infectious Diseases, 31 (2012) 641]). Unfortunately, in most cases, the considered solution is acidic (pH around four or even less), with the result that a real application would cause problems of instability (corrosion) of the treated surfaces or infrastructures.

The Ecas4-Anolyte, on the contrary, has a genuinely neutral pH (between 6.5 and 7.5) and contains less than 500 ppm (< 0.05%) of active chlorine, mainly in the form of hypochlorous acid (about 75% at pH 7, the remaining 25% being sodium hypochlorite). Both the very low concentration and the pH of the solution do not provide the product with a very long stability, especially when in contact with organic substances and/or exposed to sunlight. Under these conditions, it is sufficient to wait for a few minutes (maybe less) to allow for its volatilization or decomposition.

Based on the above characteristics, and according to both the European Chemical Agency legislation and the Australian Standard for the Uniform Scheduling of Medicines and Poisons (SUSMP), no special classification, labelling and/or packaging are required with the Ecas4-Anolyte.

The Ecas4-Anolyte has been approved by the Australian Water Quality Centre of South Australia (NATA-accredited laboratory, Dr. Paul Monis) as a valuable substitute to sodium hypochlorite for drinking water disinfection (September 2014). More recently (December 2015), the active agent has received approval by the European Chemical Agency for being used in the following areas of application: PT 1 (Human hygiene), PT 2 (Disinfectants and algaecides not intended for direct application to humans or animals), PT 3 (Veterinary hygiene), PT 4 (Food and feed area), and PT 5 (Drinking water). 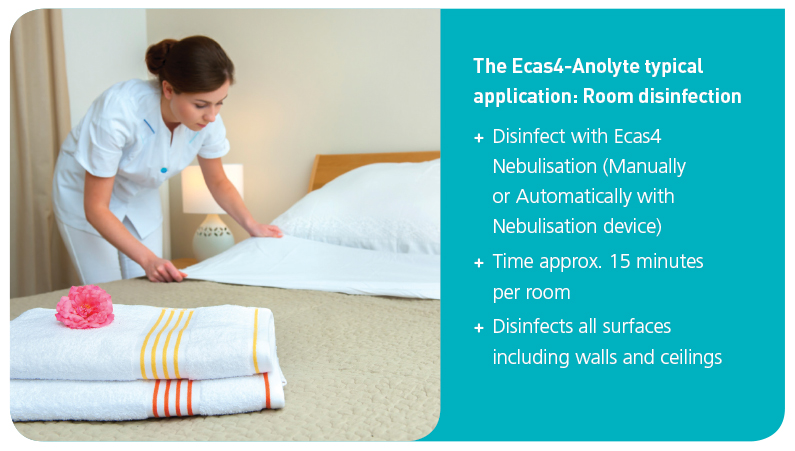 Based on the above and on the huge support that the scientific literature is constantly adding, the Ecas4-Anolyte can be applied not only as a biocide in water networks to eliminate the bacteria from the water and the biofilm from surfaces (it has proven effective against e.g. Legionella, Escherichia coli and Staphylococcus aureus), but also as a multiple-use sanitizer. Although the Ecas4 experience in this latter field has not been finalised, a number of scientific researches have already been published. It is very exciting to observe that a solution containing hypochlorous acid (i.e., something similar to the Ecas4-Anolyte, even if this kind of solutions is generally less stable and reliable) has showed to be effective as a wound cleanser, characterized by minimum cytotoxicity but potent and rapid antimicrobial activity [Advances in Skin & Wound Care, 27 (2014) 65]. HOCl-containing solutions have also been suggested for nasal irrigation in patients with rhinovirus-induced common colds [American Journal of Rhinology & Allergy, 25 (2011) 40], as well as for washing venous leg ulcers, giving an overall beneficial result in 70% of the patients (45% complete healing, 25% of substantial reduction in ulcer size). Interestingly, pain was immediately relieved in all patients and remained absent during treatment and follow-up [Journal of Wound Care, 15 (2006) 33]. 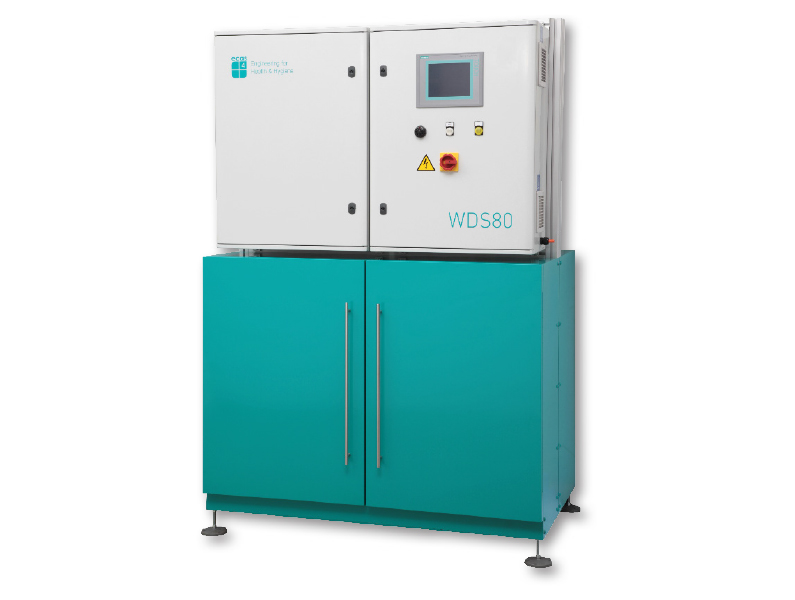 Investigations are currently in progress, in collaboration with University research teams, in order to confirm the potential of the Ecas4-Anolyte in the above applications. In addition, the Ecas4-Anolyte may be profitably used as a sanitizer for reducing the microbial content in diagnostic rooms and on equipment (air and hard surfaces); the application is safe and particularly efficient when performed through nebulization [Journal of Environmental Health Science & Engineering, 13 (2015) 6].

The Ecas4 fogging/nebulisation technology is effective also for the sanitation of environments that are generally more familiar to us such as hotel rooms, or the common living areas and the private residential areas in retirement villages and residential aged care facilities. To allow an easy yet reliable treatment of these sensitive places, Ecas4 has recently developed a mobile device that, once connected to a common 240V socket, is able to disperse the Ecas4-Anolyte in the environment under the form of a dry fine mist (droplets have a diameter of about 5 microns). The device is easily managed by means of a touch screen, which shows and allows adjustment of the main parameters of the treatment (timing, flow rates of the sanitiser and of the compressed air used as carrier). Since the ECAS-Anolyte is not harmful, the work operator can even remain in the room during the treatment (according to Australian Standards, the average exposure limit to the Ecas4 active component, estimated on a 8h/day, 40h/week work schedule, is as high as 3 mg per cubic metre, but lower concentrations are usually applied).