How hygienically safe are your hotel rooms?

The Ecas4 approach for a fast and effective sanitisation 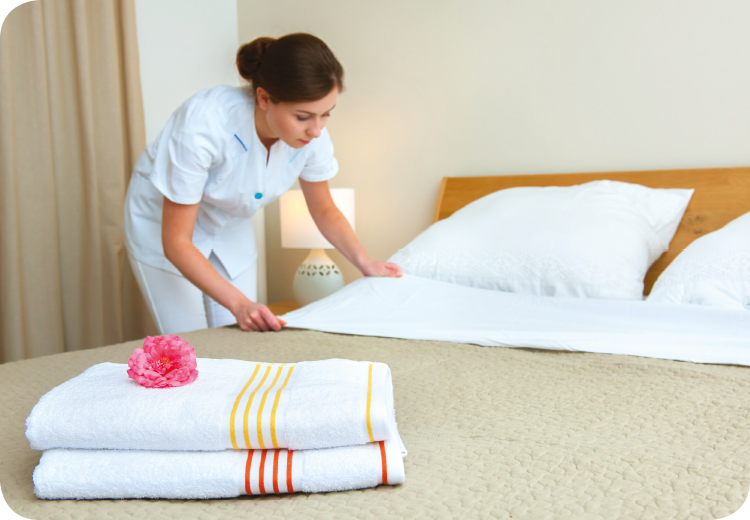 Hotels and accommodation facilities, in general, seek to offer their guests a clean, safe and pleasant environment. Very often, however, some residual dust or grime accumulates in the most hidden places, along with the bad smells of smoke or moulds, and can bring customers to have an unpleasant experience, which casts immediate discredit to the image of the entire facility.

The smells are caused by one or more volatile chemical compounds. Smell is an emanation transmitted mainly through the air, but generated by substances and microorganisms present on surfaces (mainly in those porous and textiles). The human olfactory apparatus is directed to perceive odours and plays a strong emotional role, providing all relevant information to our subconscious. As a result, bad odours transmit unpleasant sensations, which we tend to immediately connect with an unhealthy environment, making the experience of stay absolutely negative.

Since guest rooms are used for most of the residence time, they turn out to be particularly sensitive and thus in need of a thorough and careful cleaning.

How dirty can a hotel room be?

Of course, the problem is not linked to cleaning in the strict sense of the word, but rather to disinfection and bacterial contamination. What are the most contaminated surfaces we can find in a hotel room? According to an investigation carried out in 2012 by some researchers of the University of Houston (Texas, USA), on the top of the list, and without any surprise, the bathroom sink and the toilet are the worst. Subsequently, among the most contaminated, and therefore less sterile surfaces (from a bacterial point of view), are the television remote control devices and lamp switches. In contrast, the headboards, curtain rods and bathroom door handles are among the cleaner surfaces, from a hygiene point of view.

According to Katie Kirsch, coordinator of the above-cited investigation, hoteliers and housekeeping operators are currently following an ineffective and often variable regulation, which is based almost exclusively on a visual approach and is therefore ineffective in determining the level of sanitation. There are no regulatory limits for the contamination of items in hotel rooms, the study said, but its findings suggest possible health risks, especially to people with compromised immune systems. Contact with contaminated surfaces can become a vehicle for infections, thus constituting a risk of outbreaks and possible loss of further business.

In addition to the hard surfaces taken into consideration within the investigation of the American researchers, it is quite clear that carpets and curtains may be considered among the items of furniture most sensitive, being generally characterized by a low level of hygiene (they are the preferred receptacles for dust and mites). Particular attention should be paid also to cleaning the shower heads and the filters of air conditioning systems, because very dangerous bacteria, like e.g. Legionella, can hide where there is standing water.

However, dealing with the problem in an effective manner does not imply to abound with detergents and disinfectants: these products should be used in adequate amounts, as their abuse could increase the resistance of microbes to them.

Our proposal has a simple name: Ecas4. It means Engineering for health & hygiene, and comprises two parts: “ECAS” is the acronym for “electrochemically activated solution” and “4” refers to the unique, patented design of our electro-chemical reactor, which contains four chambers and a special hydraulic management, in order to produce a consistently pH-neutral aqueous disinfectant. The solution’s active agent is Hypochlorous acid (HOCl), the product that is also synthesized in the human body when we have to fight infections caused by different invading pathogens. Since HOCl is an oxidizer with cytotoxic properties (i.e., a biocide), microorganisms are not able to develop a specific resistance.

HOCl is a potent chlorine-based biocide, but it does not possess the characteristics and the harmfulness of common chlorine-based sanitizers. In particular, the Ecas4 anolyte solution contains it at very low concentrations (< 0.05%) and the neutral pH of the solution is essential to make it an effective disinfectant (about 80 times more powerful than bleach). On the other hand, the product does not possess a very long stability, especially when in contact with organic substances and/or exposed to sunlight; under these conditions, it is enough to wait for a few minutes to allow for its volatilization/ decomposition.

The Ecas4 anolyte can be used:

Commonly, the Ecas4 anolyte is dosed in the water network (without prejudicing the drinkability of the treated water) to avoid pathogen contamination (e.g. Legionella, MRSA). Treating the environment with the Ecas4 anolyte is not risky for the operator (who can remain in the room during the nebulization treatment). Yet, the oxidation capabilities of the Ecas4 anolyte are able to eliminate both organic and inorganic substances (cause of bad odours) as well as the microorganisms (bacteria, fungi, mould and viruses), thus making the environments clean and bacteriologically neutral from the point of view of odour.

The Ecas4 anolyte is a rinse-free sanitizer; it is non-harmful and much less corrosive than other disinfectants (when used in concentrate form; in practice, the diluted solutions are even safer). It has been approved as a disinfectant for potable water, not only in Australia (Australian Water Quality Centre of SA: NATA-accredited lab of Dr Paul Monis) but also in Europe.

This article was featured in LASA Fusion Magazine, Autumn 2016 (pg 11)