Case Study #3: Legionella prevention: How to effectively remove pathogens from the water network

In October 2013, the Technical Manager (TM) of Ospedali Riuniti Marche Nord, a cluster of three hospitals in the province of Pesaro, contacted the group of Electrochemistry of the University of Ferrara (Italy). The TM wrote on behalf of his company, asking for an opinion on the so-called “anti-Legionella” systems.

At that time, the Medical Direction was thinking to acquire a device for the continuous dosing of monochloramine; however, in order to select the best equipment, they desired to understand the characteristics of the many systems available on the market.

The University of Ferrara was thus contacted on account of the presence in the literature of scientific contributions in support to a specific knowledge of that research team on the issue of disinfecting solutions prepared by means of electrochemical devices. The TM declared to have received the following answer:

Water can be treated by using different oxidizing agents: chlorine dioxide, hypochlorite (usually the sodium salt), also in its neutral version (the so-called “anolyte”), ozone, chloramines and UV radiation are among the best known and applied. Typically, each of them has advantages and disadvantages. Chlorine dioxide and chloramines are typically considered because they do not lead to the formation of trihalomethanes. However, the former is highly dangerous for the infrastructures (it is corrosive for pipes, either in metal or in plastic) and the treated water is inevitably contaminated with chlorite (actually, ClO2 is synthesized by reaction between a chlorite salt and a strong acid). On the contrary, chloramines are slightly efficient oxidizers: to obtain disinfection, they must be added at concentrations 25 times higher than the dose needed by using active chlorine.

Ozone is an interesting disinfectant: it does not produce unwanted by-products, but is not persistent (its “life time” in water amounts to a few tens of minutes, so it is necessary to rely upon another oxidant to ensure long-term effects).

Ultraviolet radiations (UV) have the same flaw: they are effective at the point of application but do not guarantee any residual effect; moreover, they present additional disadvantages (especially the need for UV-transparent quartz surfaces, and the difficulties in treating large volumes of water: only low thicknesses can be considered, because the radiation is readily attenuated).

Although often “mistreated”, active chlorine is still a widely applied disinfectant; its biocide properties have been known for centuries and do not require to be mentioned here in detail. In contrast, it is worth spending a few words on the so-called “speciation” of active chlorine. In water, chlorine may be present in different forms, depending on the pH: at alkaline pH, the stable form is the hypochlorite anion; at neutral pH, hypochlorous acid predominates, while at pH values below 2, chlorine is present as dissolved gas (toxic), with a tendency to leave the aqueous environment and to enter into the surrounding environment.

The hypochlorite anion (ClO-) has a negative charge, while hypochlorous acid (HOCl) is a neutral molecule, and is thus able to approach without difficulty to microorganisms (on the contrary, the hypochlorite anion is subject to repulsive electrostatic interaction, since also the cell membrane of microorganisms is negatively charged). HOCl can cross the cell membrane exerting its oxidizing action inside the cell, with particularly deleterious effects. Hence its great bactericidal efficacy: it is about 80 times more effective than hypochlorite.

Even the chemical action of the two species is different: HOCl acts mainly as a “source of hydroxyl radicals”, while the hypochlorite form is unfortunately a halogenating agent (it leads to the formation of trihalomethanes, when the water to be treated contains organic substances, thus including also microorganisms).

Contrary to hypochlorite, HOCl is not available commercially, and must be synthesized prior to use: this is the function of some electrochemical reactors for the production of the so-called “anolyte”.

Our research team has gained specific expertise in the field, and we have contributed to the development of a reactor particularly suitable for the production of a neutral hypochlorous acid-based anolyte. The device is marketed by ECAS4, a company based in Italy, who has been working on the subject for several years (their first patent dates back to 2005, while the improved version—developed with our involvement—is of the end of 2008). You can discuss with ECAS4 the various aspects of their product.

Following the University’s advice, in November 2013, the Medical Direction decided to test the ECAS4 water disinfection system (WDS) at the Muraglia hospital, a healthcare facility comprising 100 beds, with an average daily consumption of cold water that amounts to about 100 m3.

The hospital was initially managed through a chlorine dioxide system, equipped with two storage tanks (3+3 m3); during years, the system was repeatedly modified in order to optimize its functioning but results have never been satisfactory.

In order to perform the trial, a small ECAS4 device (WDS-40, which is able to produce 40 L per hour of Anolyte) was implemented in pavilion no. 5 (ground floor). The disinfecting approach requires the continuous dosing of the anolyte in the main hot water system; in Europe, dosing is normally done at levels between 0.6 and 1.2 ppm, in order to obtain a residual biocide content of about 0.3 ppm at distal points. Starting from November 20, 2013, water samples were collected monthly from 21 different sites distributed within the three levels of the pavilion. Particular attention was focused on eight points, which were considered most significant owing to the quantity and frequency of use (blue dots in figure 1).

Figure 1: Location of sampling points; blue dots indicate the most significant points, based on quantity and frequency of use. The top red dot highlights the location of the WDS unit at the time of the initial trial; subsequently, a second dosing unit was placed in another room (pavilion 3, not shown), in order to treat the entire healthcare facility.

The sampling method recommended by the laboratory charged with performing the analyses (ARPAM, the Regional Environmental Protection Agency of Marche, Italy) requires collecting aliquots (1 dm3) of hot water in special containers with chlorine inhibitors, without flaming the dispenser and without allowing a preliminary flowing of water. However, starting from May 2014, the removal of excessively worn aerators and the execution of a brief flushing (about 1 min) led to more stable results, thus allowing testing the actual bacterial concentration in the hot water system.

The outcome of the experimentation is summarized in table 1, which collects the results of analyses performed by ARPAM on samples taken monthly during the trial (first 7 months); subsequent withdrawals confirmed the reduction of bacteria in a stable and generalized manner, throughout the whole water network. 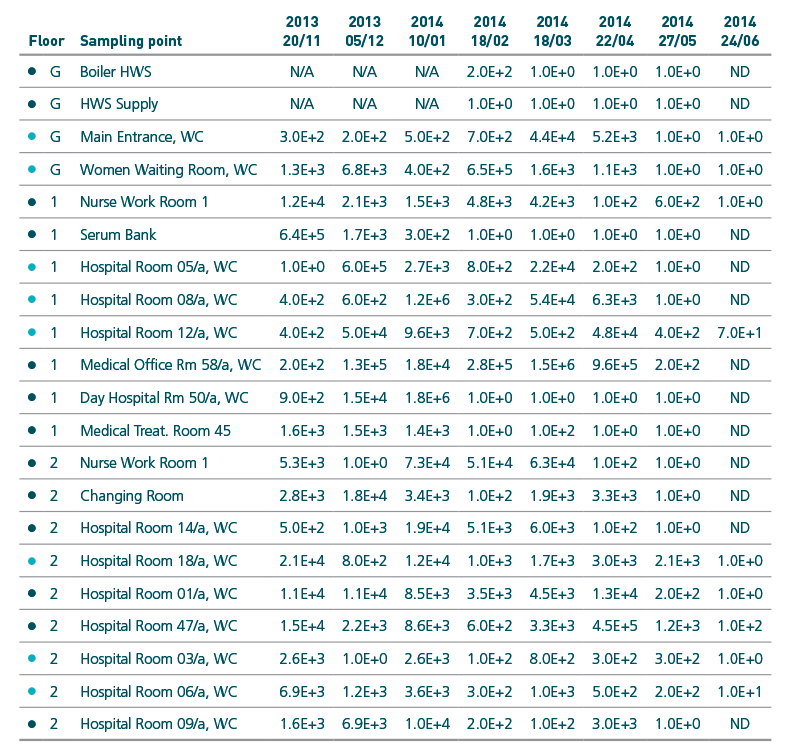 Based on obtained results, the ECAS4 disinfection system was brought to the attention of the Medical Direction and the Health Service, owing to a number of peculiar characteristics:

In the San Salvatore healthcare facility, the area of installation comprises 240 beds, with a daily consumption of cold water that amounts to about 150 m3 (two dosing units were installed, to treat both the hot and cold water systems, connected to the same WDS).

In the Santa Croce hospital, the water treated with the ECAS4 Anolyte serves 270 beds, with an average daily consumption of cold water of about 200 m3. The hospital was initially managed with four separate systems (three of them were based on chlorine dioxide disinfection agent), which were all replaced by a single ECAS4 system.

This article was featured in The Australian Hospital Engineer Journal, Autumn 2016 (pg 50-51)